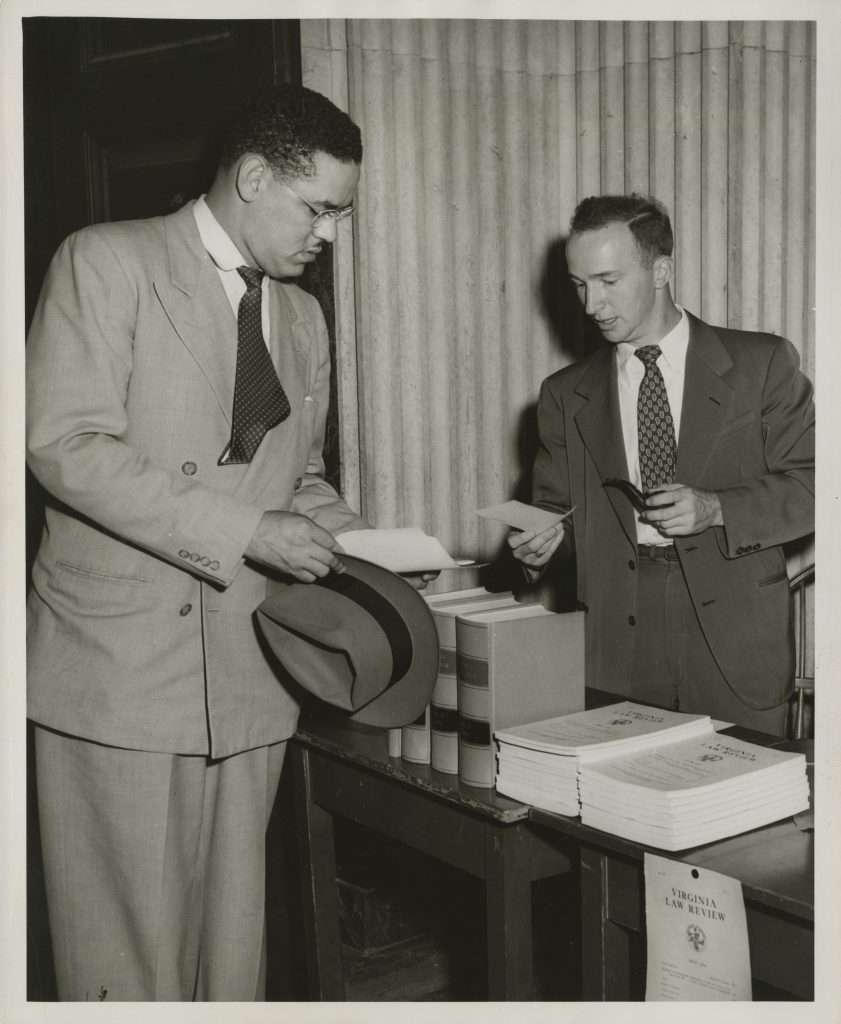 Gregory Swanson, the first African American to gain admission to the University of Virginia, consults with the assistant dean of the law school after registering for classes on September 15, 1950. As a twenty-five-year-old practicing attorney in Danville, the Howard University graduate wanted to pursue studies in corporate and insurance law at the University of Virginia. He applied in November 1949, and, despite the unanimous support of the law school faculty, the Board of Visitors rejected him, citing the following reason: "The applicant is a colored man. The Constitution and the laws of the State of Virginia provide that white and colored shall not be taught in the same schools."

The Virginia branch of the National Association for the Advancement of Colored People took up Swanson's cause and filed a lawsuit on his behalf. The U.S. Circuit Court of Appeals ordered that Swanson be admitted to the law school, and the presiding judge publicly chastised the university's attorneys for "using the courtroom as a forum for public relations."

Though accepted into the law school class in 1950, Swanson was not permitted to partake in all aspects of university life. He was barred from living on Grounds, and had to reside in a colored-only hotel. Social activities were not open to him. When he wrote to university president Colgate Darden and asked if he could attend any of the "private" dance societies that were, in Swanson's words, "an integral part of the activity of the University," he was denied the right. Darden's response was that the dance societies as well as other organizations were "private" and therefore open only to members. According to Ervin L. Jordan Jr., Swanson left the school after completing only one year "due to … an overwhelming climate of racial hostility and harassment."

After his short tenure at the University of Virginia, Swanson worked as an attorney in Martinsville and Alexandria, Virginia. He joined the Internal Revenue Service's legal department in 1961 and worked there until his retirement in 1984.