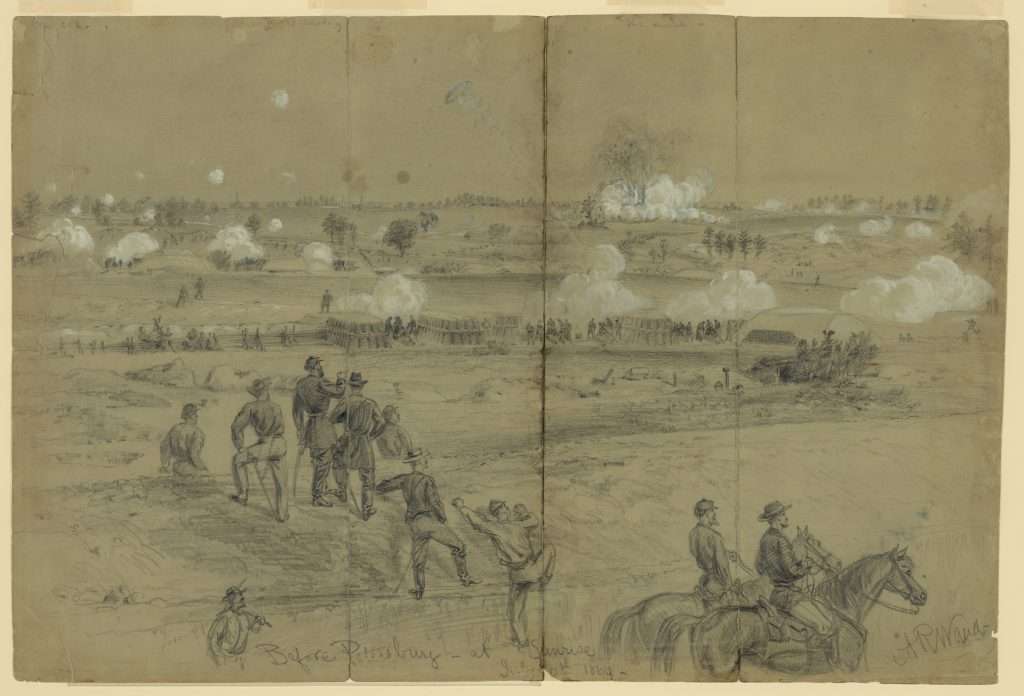 The chief engineer for the Union Army of the Potomac stands on an embankment as he watches the action unfold at dawn on July 30, 1864, during the opening moments of the Battle of the Crater. A mine surreptitiously dug under Confederate lines by Union troops had been packed with explosives and detonated at 4:44 a.m. Alfred R. Waud, an artist reporting from the front for Harper's Weekly, was there on the scene and made this pencil sketch, which captures the explosion in the far distance. A Michigan soldier later wrote that at the moment of detonation there was "a heaving and lifting of the fort and the hill on which it stood; then a monstrous tongue of flame shot fully two hundred feet in the air, followed by a vast column of white smoke … then a great spout or fountain of red earth rose to a great height, mingled with men and guns, timbers and planks, and every other kind of debris, all ascending, spreading, whirling, scattering."

The explosion was the signal for a Union artillery barrage. Small figures in the distance, Union pickets, can be seen running in from their pits and shelters on the front to reach the outer line of attack. In the middle distance are eight- and ten-inch mortar batteries firing off rounds. Nearer is a line of abandoned rifle pits, and in the foreground are two soldiers on horseback riding along a sunken road.

Union troops piled into the enormous hole left by the explosion—an opening in the landscape referred to as the Crater—and became easy targets for Confederate soldiers, helping to turn the battle into a major Union defeat. The Crater also became infamous for the cruel treatment inflicted on the black Union troops who participated, many of whom were captured and murdered.