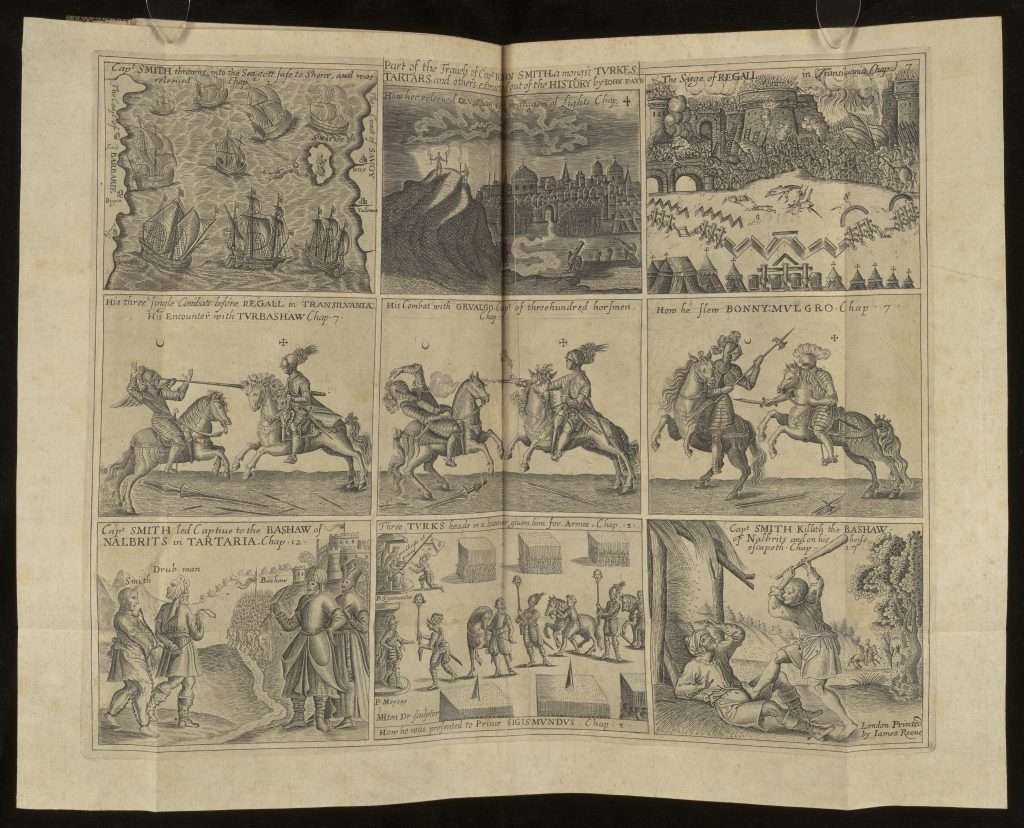 Part of the Travels of Capt John Smith, amongst Turkes, Tartars, and others extracted out of the History by John Payn

This fold-out engraving depicts nine heroic scenes from an autobiographical account by John Smith of his adventures in eastern Europe—an account so colorful that some scholars have doubted its authenticity. These images were published in The True Travels, Adventures, and Observations of Captaine John Smith, in Europe, Asia, Africa, and America, from Anno Domini 1593 to 1629 (1630). The subtitle of the book details his account: His Accidents and Sea-fights in the Straights; his Service and Stratagems of warre in Hungaria, Transilvania, Wallachia, and Moldavia against the Turks, and Tartars; his three single combats betwixt the Christian Armie and the Turkes. After how he was taken prisoner by the Turks, sold for a Slave, sent into Tartaria; his description of the Tartars, their strange manners and customes of Religions, Diets, Buildings, Warres, Feasts, Ceremonies, and Living; how hee slew the Bashaw of Nalbrits in Cambia, and escaped from the Turkes and Tartars. Together with a continuation of his generall History of Virginia, Summer-Iles, New England, and their proceedings, since 1624, to this present 1629; as also of the new Plantations of the great River of the Amazons, the Iles of St. Christopher, Mevis, and Barbados in the West Indies.

Citation: The True Travels, Adventures, and Observations of Captaine John Smith, in Europe, Asia, Africa, and America, from Anno Domini 1593 to 1629. A 1630 .S55. Special Collections, University of Virginia, Charlottesville, VA