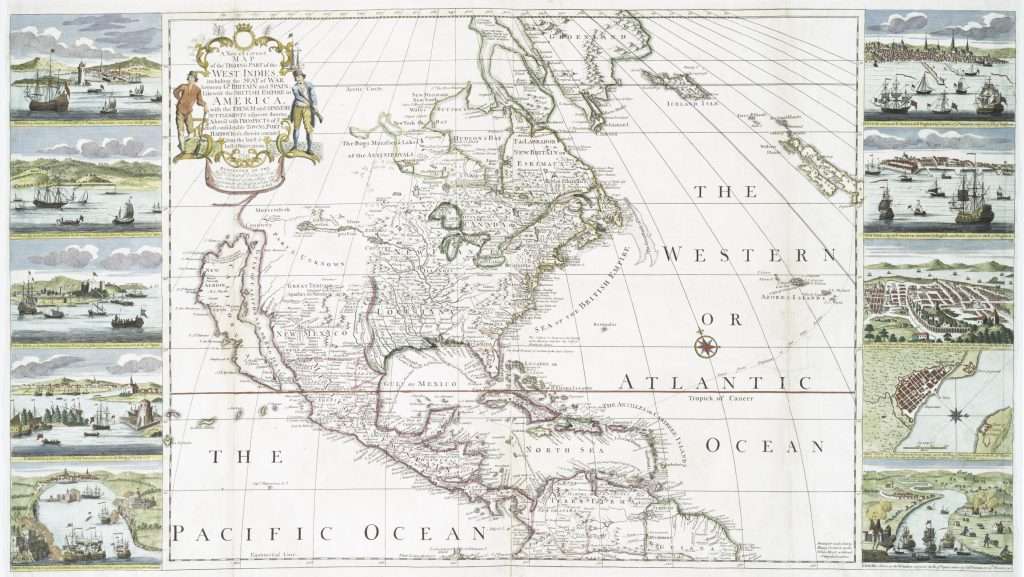 This 1741 color map shows North America and the "… Trading Part of the West Indies, including the Seat of War between Gr. Britain and Spain," a conflict that began in 1739 and became known as the War of Jenkins' Ear. (The war eventually merged with the War of the Austrian Succession and did not end until 1748.) Engraved panels surrounding the central map depict, on the right, the cities of Boston and New York, both under the control of the king of England; beneath them are views of Mexico City, Vera Cruz, and Chagre, all subject to the king of Spain. The panels on the left side depict Panama, Porto Rico, Cartagena, and Porto Bello, all under the king of Spain. The bottom images, at right and left, depict the cities of Chagre and Porto Bello being fired upon and captured by English ships under Vice Admiral Edward Vernon, "Commander in chief of all his Majs. ships in the West Indies." This map, printed and sold by Henry Overton in London, was dedicated to Vernon and probably created to celebrate his two victories.

As a young man, Lawrence Washington, older half-brother of George Washington, served under Vernon in the war and was so impressed by the English naval hero that he named the family's ancestral estate Mount Vernon.