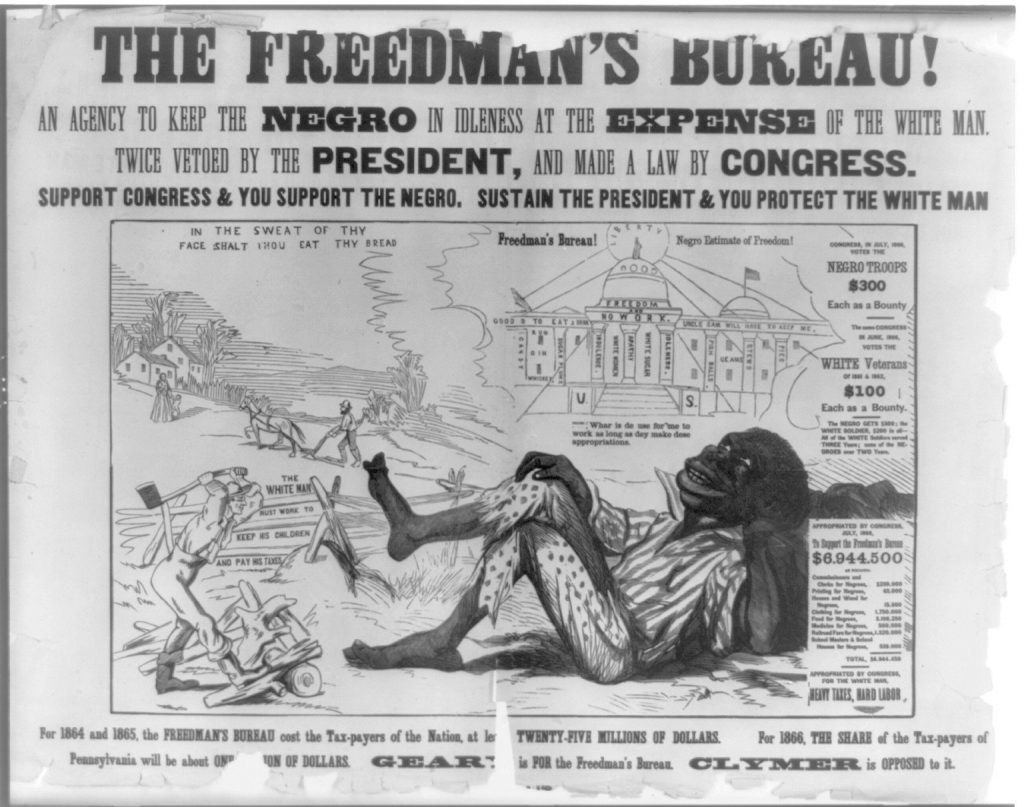 The Freedmen’s Bureau! An Agency to Keep the Negro in Idleness at the Expense of the White Man.

A racist 1866 political poster demonizes a newly freed African American as being idle "at the expense of the white man."  The cartoon portrays a barefoot Black man in tattered clothes lounging in the foreground, while white men are hard at work plowing a field—captioned, "In the sweat of thy face shalt thou eat bread"—and chopping wood—captioned, "The white man must work to keep his children and pay his taxes." In contrast, the Black man is quoted in stereotypical dialect: "Whar is de use for me to work as long as dey make dese appropriations."

The poster takes aim at the expense and perceived wastefulness of the Freedmen's Bureau, which was established to protect the newly freed enslaved population. A fictional image of the Freedmen's Bureau building, modeled to look like the U.S. Capitol, bears the following motto beneath the dome: "Freedom and No Work." The pillars of the building read, left to right: "Candy," "Rum, Gin, Whiskey," "Sugar Plums," "Indolence," "White Women," "Apathy," "White Sugar," "Idleness," "Fish Balls," "Clams," "Stews," and "Pies."

This poster was one of a series of broadsides produced in support of Hiester Clymer, an 1866 candidate for the governor of Pennsylvania who was running on a white supremacy platform against the Republican candidate, John W. Geary. Though Clymer lost in the subsequent election, Blacks continued to be misrepresented as lazy and shiftless during the post-Civil War Reconstruction era—a depiction that persisted well into the twentieth century.