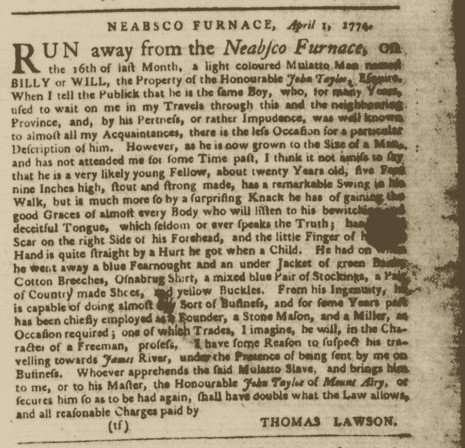 An advertisement placed in the April 21, 1774, edition of the Virginia Gazette by Thomas Lawson seeks the capture of a runaway slave named "Billy or Will, the Property of the Honourable John Tayloe, Esquire." Lawson, the iron agent at Tayloe's Neabsco Furnace in Prince William County, described the young man as being "stout and strong made," and "having a "remarkable Swing in his Walk." Distinguishing features included a "Scar on the right Side of his Forehead, and the little Finger of his … Hand is quite straight by a Hurt he got when a Child." The enslaved African American had worked as a skilled ironworker, a stonemason, and a miller, and Lawson was eager to get him back, offering to pay "double what the Law allows, and all reasonable charges" to "whoever apprehends the said Mulatto Slave." This runaway may have been the same Billy who, during the American Revolution, became a principal in a court case that forced white leaders to confront the logic of slavery.