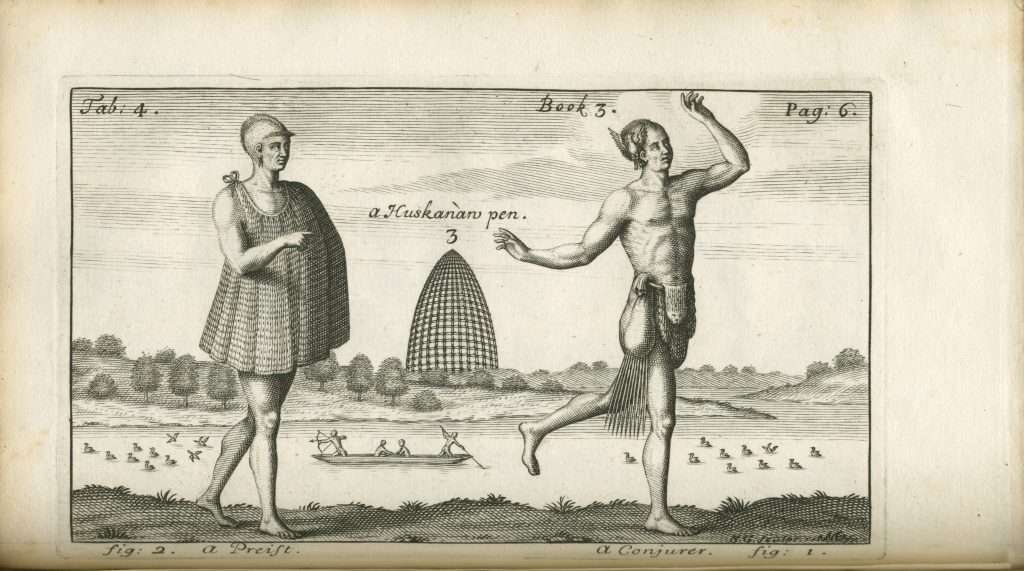 An enormous cage built of saplings can be seen on the horizon of this engraving published in Robert Beverley Jr.'s History and Present State of Virginia (1705). This cage—though doubtless exaggerated in size here—was used in the course of the initiation rite into manhood that many of the mid-Atlantic Indian tribes practiced and that the Powhatans called the huskanaw. The ritual was outlined by Virginia colonist Beverley, who probably got his information from Indian men. Beverley wrote that part of the ritual involved taking Indian boys deep into the forest and giving them a drink that seemed to induce hallucination, spasms of violence, and amnesia. If the violent outbursts became uncontrollable, the boys were confined to cages like this one. The figures of a priest and conjuror stand in the foreground, while, in the mid-distance, Indians in a boat hunt waterfowl. This engraving by Simon Gribelin was based directly on two separate 1590 engravings by Theodor de Bry, which in turn were based on earlier watercolors by John White. The only major addition to the image was that of the cage used in the huskanaw ritual.