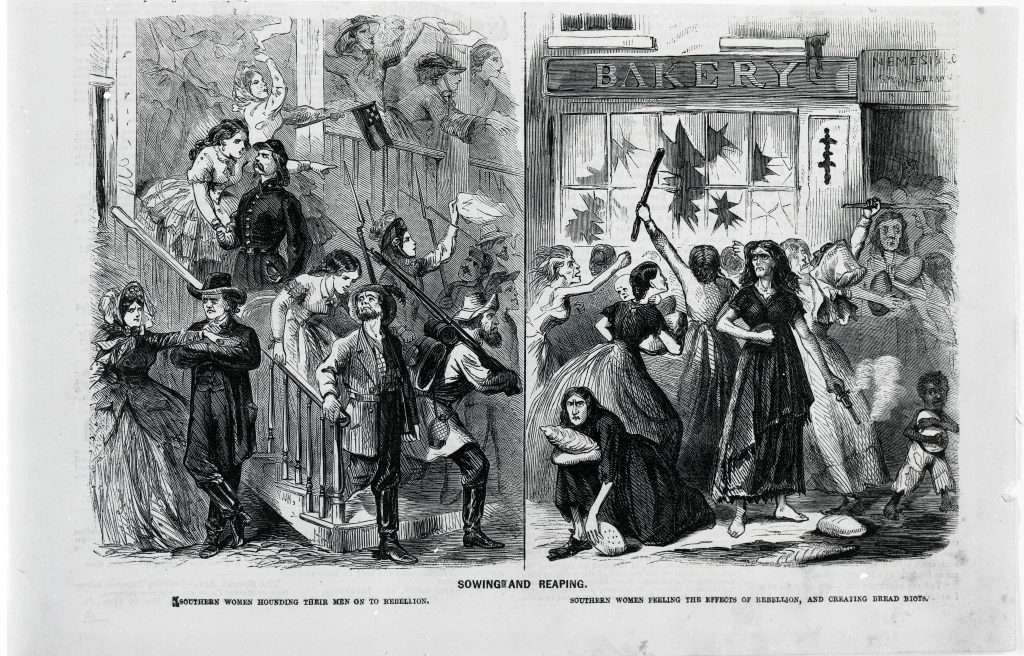 Gaunt, hungry women (at right)—several wielding clubs, another a smoking pistol—take to the streets of Richmond, Virginia, on April 2, 1863, to protest food shortages, hoarding, speculation, and spiraling inflation in the Confederate capital. When a group of Richmond women took their complaints to Virginia governor John L. Letcher that day, he refused to see them. Their anger turned into a street march and attacks on commercial establishments. Several eyewitnesses reported seeing an emaciated woman raise a skeleton of an arm and scream, "We celebrate our right to live! We are starving!" Others heard a chant of "Bread or blood!" The mob then began attacking government warehouses, grocery stores, and various mercantile establishments, seizing food, clothing, and wagons, as well as jewelry and other luxury goods. Only after troops were deployed and authorities threatened to fire on the mob did the rioters disperse. More than sixty men and women were arrested and tried for their actions during the riot.

Confederate military officials tried to block news coverage of the Richmond Bread Riot, but Northern newspapers and magazines reported on it, including Frank Leslie's Illustrated Newspaper which published this two-paneled engraving in its May 23, 1863, edition. Titled Sowing and Reaping, the illustration points out that southern women, in their zeal for war, brought suffering upon themselves. In turn, Richmond city newspapers characterized—and dismissed—the hungry protesters as thieves, prostitutes, and crones.